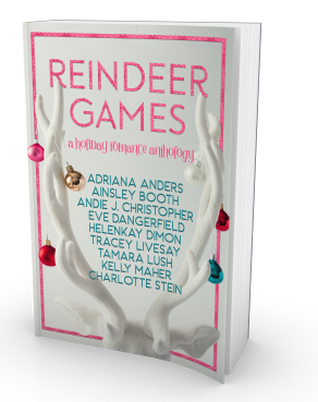 These are the games people play when they’re snowed in, caught in a storm, and stuck with the ones they can’t resist.
Nine best-selling and award-winning authors bring sexy stories to steam up your holiday nights.
​**20% of proceeds will be donated to No Kid Hungry.**

​“Three words: Micah freaking Graham! I have loved all of Ms. Anders' heroes, but I think I found a new favorite. A big, strong mountain of a man who literally pulls a woman from a falling vehicle, who climbs trees for a living, knows his way around a kitchen, and makes love like it's going out of style? Yes please.”
--Michelle, Goodreads Reviewer

"You will fall in love with each character. This is the perfect collection to be snowed in with. It will keep you warm all season long!"
-- Mary, Rabid Reads Reviews​

HIS FOR THE HOLIDAY by HelenKay Dimon
Jonah Stark’s crush on Cameron Meade, everyone’s favorite professor, lasted through graduate school. Years later and no longer a student, Jonah is back and still drawn to the mysterious recluse who lights up a classroom with his lectures. With the help of a meddling friend, a secluded cabin and some holiday cheer, these colleagues might finally make the move from hot for each other to can’t live without each other.

DYSFUNCTIONAL by Eve Dangerfield
Country club waitress Jessica’s track record is so bad she’s sworn off men for the foreseeable future. But a girl has needs and when a handsome customer asks her out, she informs him a pre-Christmas one night stand is as far as things can go. Of course, that was before Austin kissed her. That was before she realised he’s not like anyone who came before.

SAVED BY THE MOUNTAIN MAN by Adriana Anders
I pulled her out of a near-fatal car crash, brought her home, patched her up. Now we’re stuck together, snowed in for the holidays. And I never want her to leave.

SNOW ANGEL by Tamara Lush
Charlotte King has known Oliver Menendez since she was born. When she was was five, she kissed Oliver. When she was fifteen, Oliver kissed her. Now they're older and stuck in a Vermont ski cabin during Snowmageddon — and they do a whole lot more than kissing.

GRIEVANCES AND GLITTER by Kelly Maher
When a rock star and an attorney find themselves stuck in a cabin in the woods, the reluctantly reunited lovers aren’t sure if they should curse their matchmaking friends...or thank them.

ALL THEY WANT FOR CHRISTMAS by Andie J. Christopher
Twas the night before the night before Christmas, and Frankie's snowed in with her ex...and his new boyfriend. What could go wrong? Or right?

STUCK by Ainsley Booth
The hot guy in a suit across the aisle is trouble. He’s the cold-day-in-hell type Aibhlin knows all about. But when their train gets stuck on the tracks and day turns into a long, cold night, Sam’s devilish smile is hard to resist.

WAITING IN VAIN  by Charlotte Stein (previously published)
When Nancy is invited to spend Christmas with her sister-in-law’s family, she is pretty sure it’s gonna be wall to wall wholesome, polite party games and stuffing her face with mince pies. But then sexy, sultry Mick Hennessy turns up, and the sedate affair she was banking on takes a turn for the too hot to take...